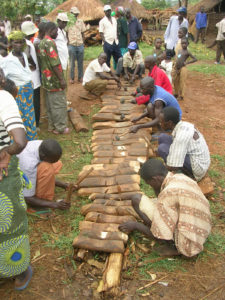 UGLASS is a 3 wave household panel survey of 550 households in western Uganda. The original focus of the survey was to understand the contribution of forests to rural livelihoods (Wave 1 – 2003). That survey was undertaken by Glenn Bush (now at Woods Hole Research Center) on behalf of the Wildlife Conservation Society to provide critical input to the forest sector reform process.  A second wave of data was collected in 2006/2007 by Pam Jagger. The variation in governance regimes across the study areas was leveraged to estimate the welfare impacts of the forest sector decentralization reform.  A third wave was added in 2012, with modules on fuel use, cooking and health outcomes added to the protocol.  The second and third waves were led by Dr. Jagger in collaboration with Makerere University, Uganda. The study takes place in three research sites. The first is a sample of households in 6 villages adjacent to Rwenzori Mountains National Park. The second is a sample of households in 6 villages in the privately owned forest mosaics of Hoima and Kibaale Districts (Bugoma study site), and the third site is comprised of villages around the Budongo Central Forest Reserve (N=6 villages).

Wave 3 of the survey was funded by National Science Foundation, and the BASIS and Nutrition Collaborative Research Support Programs (CRSPs) (USAID). Jerry Shively at Purdue University was a key collaborator on wave 3 of the survey.